No. The economy is not more important than our humanity. We should be defined by who we are, not by what we make. I matter. You matter. My parents matter. And your grandparents matter. History matters (and it will judge us). The future matters (and we all deserve one). We should not value commerce over compassion, cold hard cash over warm hearts. People should matter more than things. How can we be the best we can be, if we are willing to do the worst? Families matter. Communities matter. How we help each other matters. Businesses can rebuild, but we cannot bring back the dead. Or recover our souls. Wash your hands. Stay home. Keep each other safe. Honor and respect one another. This is the only way we can get through this - together.  Read more!

Please note: Because of the recent outbreak (we all know the one), many theaters have been forced to shut down, but some of them are offering video links for patrons to watch in the safety of their shelter-in-place homes. Thankfully, this play can be viewed by either contacting A.C.T. to obtain a pay-as-you-can video link, or going directly to BroadwayHD. Either way, better hurry, since this option is only good until April 5.

Toni Stone (according to wikipedia), born Marcenia Lyle Stone in Bluefield, West Virginia, was the first of three women to play professional baseball, as a part of the Negro League. The American Conservatory Theater covers her stint with the 1950's Indianapolis Clowns in their recent production of "Toni Stone", a west coast premiere.

Dawn Ursula is a strong, outspoken, force of nature as Toni Stone, who had to have been a force to reckon herself, in order to compete as a female in a man's world of sports, as well as a black player in a white owner's universe. Lydia Diamond's casual writing style perfectly captures the easy way athletes have related to each other since sports was invented. This team especially needs their comradery as they confront the racism and sexism of the time (much of which is still sadly relevant in our own society).  Director Pam MacKinnon and Choreographer Camille Brown present a smooth, entertaining and vibrant tale of a little known part of sports history. It's funny, poignant, and real. The dialogue, the staging, the game - all poetry. 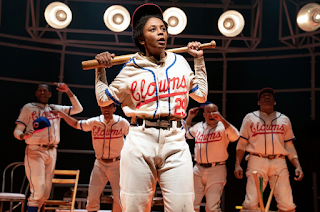 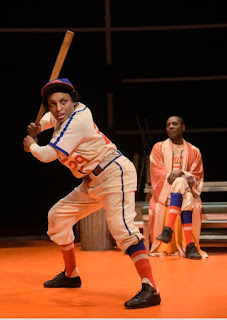 The rest of the ensemble, Daniel J. Bryant, JaBen Early, Kenn E. Head, Marquis D. Gibson, Rodney Earl Jackson, Jr., Sean-Maurice Lynch, Ray Shell, and Jarrod Smith, match Ursula quite well, stepping in and out of various characters from Stone's life (male and female). In fact, the strength of the troupe shows us how necessary it would be for teammates to support each other, then and now.

The show is a delight from beginning to end, and a wonderful distraction from our current situation, while spotlighting what we still need to work in our world. Hope we get to do so soon. In the meantime, keep playing ball (at home). 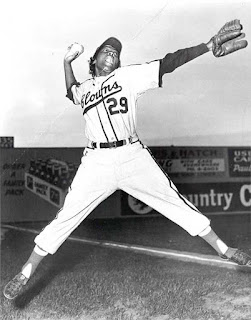