The Mystery of Edwin Drood

Charles Dickens never finished writing "The Mystery of Edwin Drood". He died instead. So of course the only thing to do was to turn it into a musical and have the audience guess the ending. Right? That was the idea behind Rupert Holmes' vision anyway. Who better for the job than Roundabout Theatre, who sure do like to put on some fun productions (see previous review here). "Drood" (in grand old music hall tradition no less)  is no exception. And what's even more fun? To perform at the most famous former night club in the world, Studio 54. So now you'll want to see the show so you'll be able to say you were there too, just like Andy Warhol. Can't get hipper than that.

Edwin Drood (Stephanie J. Block of "Wicked" fame) is a Victorian gentleman (yep, played by a woman to stir up more mystery) who suddenly disappears. Is he dead? Who killed him? His fiance Rosa (Betsy Wolfe) or his rival John Jasper (Will Chase) or the suspicious eastern foreigners, Helena and Neville Landless (Jessie Mueller and Andy Karl)? The possibilities are endless and there is no shortage of audience participation in figuring it all out, so be forewarned. But don't worry, there is a narrator, the Chairman (Jim Norton), who guides us in the plot and in our reactions, occasionally jumping in and out of characters (as do most of the cast). A cheery Master of Ceremonies, fitting for a raucously bawdy-lite evening.

In this particular production, Chita Rivera was supposed to play Princess Puffer, madame of an underground opium den, but was substituted with Alison Cimmet, who was just fine (her normal role of Violet Balfour went to Jenifer Foote). In fact, the entire ensemble shows us a romping good time and sing some rowdy songs, including "There You Are", "Moonfall", "Ceylon" and "Off to the Races". The first act might drag a bit but the second act involves the spectators even more directly so that will definitely rouse you. The actors are all pros of course, and laughter abounds (unlike the dreary notes of the original novel). Block does a great disgruntled diva.

It's a play-within-a-play, with actors playing actors playing Dickens characters, but mostly talking to us. Some of them will run about the aisles and yes, might drag up an unsuspecting patron of the arts right there on stage. But everyone seems so earnest and of such enthusiastic good cheer that you can't help but be drawn into the fun, especially with all the asides and winks going on. Plus you get to choose the ending. And maybe sing a few notes yourself. A charming production, "Drood" delivers the fun, if not all the answers. But what fun would life be without a little mystery? Read more! 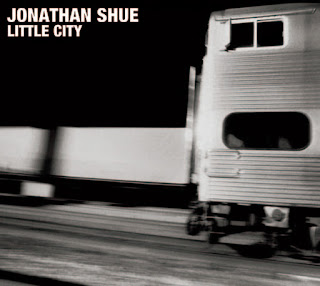 Bay Area/Seattle musician Jonathan Shue brings us another low-key folksy lyrical album, perfect for a casual beer night or to ease your traffic-congested commute. Like his previous albums, "In the Valley of Heart's Delight" (EP) / "Chasing Hurricanes" (a kate west review here), "Little City" also features that gentle guitar/harmonica combo. Sure it seeps into country, but only in that modern cool way so popular with the kids these days.

Some of the lyrics might be a bit simpler this time around: "it must feel like a crumbling ceiling, or paint that won't stop peeling, or as lonesome as a loaded gun" (The Story of Your Son) but profundity shows up too: "there's no home at the end of your road" (There's No Home) or "you're my new favorite read ... if you aren't yet through the complete works of you" (The Complete Works of You). Then there's the wistfulness of the traveler in Traveling Song, as if Shue himself were remembering his journey from San Francisco to Seattle. The title track (Little City) also has a few triumphant notes: "I'm just a man once again and you're just a town".

And like his previous works, this is not a one-time listen. You'll want to play it a few times, easing into the nuances just a little differently each time. By the way, each song and each album shows a stronger and stronger voice. This guy is one to watch (and listen to).

Catch him on iTunes, CDBaby and Amazon.com. 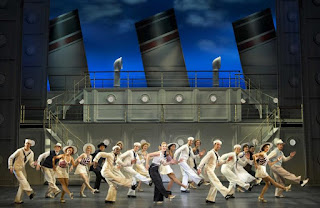 In the spirit of retro glam so popular these days, the Roundabout Theatre of New York brings the 1930's Cole Porter musical, "Anything Goes" to Los Angeles, home of Hollywood glitz. A match made in Heaven. Hey, if you're in the mood for fast-talking molls and tap dancing, well, everyone, this is the holiday show for you. And yes, Cole Porter's famously romantic music holds up quite well in setting the mood for this fun little jaunt overseas.

Reno (the impossibly perfect Rachel York) has the hots for Billy (smoothly portrayed by Erich Bergen) who pines for Hope (Alex Finke). Throw in the odd gangster (Fred Applegate as the gruffly fun Moonface Martin) and you have madcap misunderstandings and mistaken identities galore. When they all chase each other onto a luxury ship, appropriate hijinks ensue. Guaranteed.

The set design by Derek McLane puts us all right on top of a smooth sailing ocean, with mini cabin scenes and majestic ballrooms and Martin Pakledinaz gives us lovely old time costuming, all of which will have you yearning for the nostalgic. Then there's the music. Each song is more famous than the last, including the title song "Anything Goes", as well as "I Get a Kick Out of You", "Blow, Gabriel, Blow", "It's De-lovely" and "Friendship". And right again, you will leave the theater humming at least one of the above. Good singing and even greater dancing transports us to just the right amount of escape, thanks to Kathleen Marshall's professional directing.

Granted, you may not be completely immersed, but even as you are aware you are watching a show, you'll give in to the broad style and occasional silliness, in spite of yourself. Some of you may even remember the grand Broadway Dame Ethel Merman's turn as Reno, immortalizing many of the tunes. This show is certainly a classic. And there is not much to complain about in this impeccable production. Edward Staudenmayer might be a bit much with his way-over-the-top Lord Evelyn Oakleigh, but then again his character is supposed to be ridiculous. The dancing however, is impeccable and as pictured above, awfully fun to watch. And it just flies by. Entertainment for the whole family. Promise.

So be sure to catch the next voyage, if it happens to land at a theater near you. Read more!