Having recently visited Seattle for the first time, I was struck by how right so many of my friends were. This was a perfect city for me - laid-back, liberal, intellectual, but not snobbish, and environmentally savvy. Everyone was friendly, with no agenda. Coming from Los Angeles, you can imagine my relief not to hear an itemized list of someone's resume every time I merely said hello. The air was clear, the weather gorgeous (though I was warned time and time again how utterly atypical this was and not to get used to that bright sun) and little wisps of cotton blew across every road, like leftover pixie dust. Truly magical. Too good to be true, right?

I did all the must-sees like Pike Place and the Space Needle. Even visited the architecturally innovative newish Library. Saw surrounding little versions of Pleasantville like Kirkland, Bellevue and Ballard. All worthy tourist photo opps, to be sure. But my favorite spot in Seattle has to be Scarecrow Video.

The staff here lives, breathes and eats cinema, pretty much. The store has the most extensive film collection I've ever seen and puts Hollywood Boulevard to shame. Every recommendation is dead-on and they expect you to know your film history as well, since most movies are categorized by director. Who needs Netflix when you can walk in to the very real and present warm atmosphere of your fellow cinephiles? It'll take you years to learn everything about the place, so start by chatting up the staff - most of whom are here for the long haul. Then come back to La-la Land and tell 'em what they're missing.

If you're going, here are the jots of noteworthy interest:

A quick exit off of I-5 and an easy walk from the University of Washington.

For directions to the store or how long it will take you to walk here from Boston, click here.

Oh and don't forget to visit the original Rudy's at http://www.rudysbarbershop.com.

A Sci-Fi nerd for as long as I can remember, "Star Trek" has to be my first love and Spock my first crush. Cold, emotionally unavailable intellectuals ... ah, that's what I'm doing wrong. Anyway, enough about me, let's Trek talk.
I admit I was skeptical about the new movie, and purists will still take issue with some of the creative liberties of the story lines. Written by Roberto Orci and Alex Kurtzman, this adaptation of way-too-little-of Starfleet history does nonetheless manage to remain essentially true to Gene Roddenberry's original characters, believe it or not. Just keep thinking alternate-universe time lines.
Directed by J.J. Abrams ("Lost"), the new "Star Trek" brings together old crewmembers Spock (Zachary Quinto of "Heroes" fame), Dr. "Bones" McCoy (Karl Urban), Chekov (Anton Yelchin), Uhura (Zoe Saldana), Scotty (Simon Pegg) and Sulu (John Cho) in a whole new old adventure. Also, Eric Bana co-stars as the villain Nero and Leonard Nimoy himself appears as an older version of Spock (that will be explained when you see it). Confused yet?
Suffice to say, there is some rewritten history, but not enough to really mess with the essence of the classic Enterprise gang we have come to know and love. We get to see Kirk, Spock and crew back when they first enroll in the Academy and then go on their first mission. It's nice to speculate on how they all met and what their first impressions of each other were. Urban's McCoy is especially good, as he channels DeForest Kelley to a T.
Again, some of the back story is a tad different, due to messing with time travel, but you will recognize everyone. Simon Pegg is an excellent Scottish Engineer and Quinto is a perfect Spock. By the time Chris Pine dons the yellow shirt of command, he is a young Shatner incarnate. Yelchin's Chekov is a little overdone (but so was Walter Koenig). Zoe Saldana is fine as Uhura and John Cho handles Sulu alright, for what little screen time he has. There's even a brief and unrecognizable appearance from Winona Ryder as Spock's Mother. And Michael Giacchino's original score contributes to the excitement and hipness that is the new Abrams film and is overall a fun ride.
I don't know whether or not the new "Star Trek" will stand the test of time as it is someone's personal version of a beloved franchise. And while it is action-packed and so very cool, it doesn't cover the core attraction - mainly the ideal universe the original creators envisioned. "Space. The final frontier. These are the voyages of the Starship Enterprise. Its five year mission - To explore strange new worlds. To seek out new life and new civilizations. To boldly go where no (one) has gone before."
And let's not forget the Prime Directive, an important Starfleet law of noninterference with other civilizations, much like the creed our contemporary wildlife photographers and filmmakers adhere to. I loved "Star Trek" for the comradery and the messages of morality in the story lines. And for the idealism of building an organization that brought together different races (and species) in one common mission. "Star Trek" inspired us to invent cell phones and to have interracial crew members and even female captains. This vision of our future helped NASA work on our present.
And is there another 1960's forward-thinking television show that spawned so many equally idealistic spin-offs? "Next Generation", "Deep Space Nine", "Voyager", "Enterprise" - each of these shows tried something different, while keeping to the main point - promoting peace and unity whenever and wherever possible in this vast universe of ours. If there is a sequel (and based on audience response, I don't see why there would not be), I'd like to see the characters go a little deeper into that part of our space which inspires us to improve on our own humanity.
J.J. Abrams may not be the biggest ST fan, but surely he can understand the appeal. "Live Long and Prosper". 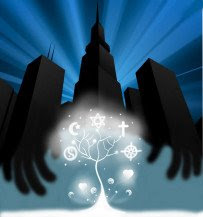 "Nostalgia and Dreams" is a brand new play by Brett Holland, company member of the eclectic White Buffalo Theatre Company in North Hollywood. An apartment building full of tenants showcases lives turned upside down at the same time a local Cathedral is scheduled for demolition. The obvious references to a crisis in faith are interspersed with seemingly dark secrets. Unfortunately, despite committed performances, it doesn't quite come together.

One young couple battles with what appears to be a marriage-ending secret. Another mother-daughter pair wrestles with possible anorexia. One tenant whines about being gay and another neighbor talks to someone dead. In an effort to create universal conflict, Playwright Brett Holland makes the characters interact from time to time, but ultimately they have no real affect on one another.

Director Kerrie Keane weaves the story lines together, but not everything fits. For instance two "suits" (Danny Junod and Jessica Wright) slip down the theater aisles when the lights dim in between scenes. Their corporate presence seems to indicate societal and business pressures on the protagonists, often egging them on into deeper insecurities. They howl and gyrate, taunting everyone, but could just as easily been eliminated as they do not add much to the general plot.

Speaking of plots, the script follows quite a perplexing few. Paul (Playwright Brett Holland) is a young man tortured by his homosexuality. He is shadowed by a young boy (Chris Haehnel) who appears to be a symbol for something. His inner child? His past? His future? It is never explained. We never find out why Paul is so unhappy with his lifestyle or his relationship to a stressed-out new mother (Regina Peluso). Standout Sydney Park is radiant as Rebecca, the young girl with a God fixation who wants to be much too thin. Her mother (Angelina Leaf) is in denial until finally snapping in a rather awkward force-feeding scene, after neighbor Paul attempts a half-hearted intervention. Tommy (Carlo Serna) and Amy (Marguerite Moreau) are a young couple with communication problems. Their relationship is a bit grating and cutesy. And after all the build up with a seemingly dark secret, their resolution is a bit watered down. Lynne Conner is a spiritual old woman who talks to herself, or maybe someone from her past or from the graveyard. That is never explained either. Marguerite Moreau and Sydney Park (keep an eye on her so you can say you-knew-her-when) give the strongest performances, in spite of the rather weak dialogue. Nothing connects in a truly genuine way.

Life, death, love and spirituality are all touched on but never given deep illumination. The play would do much better as a one act, in a shorter format, with some brief glimpses into life vignettes. That way, each character could have snippets of conversations and the poetic intent would work much better, rather than leading us down character paths, only to find ourselves asking why? Granted, the intention is sincere, but the overall writing needs tidying up as the messages are rather obvious. There is a lot of yearning and some inexplicable monologues in the mix as well. Also, the attempt at absurdism does not quite make it. To go in that direction, one would need to go to the other extreme and make a longer play, with more fleshed out fantastical characters.

As it is, the play now stands in between two genres and does not reach its true potential. We never specifically find out what the nostalgia and dreams are all about either. Too bad. The White Buffalo Theatre Company certainly has heart however and seems to be doing well for itself. So there's that. Read more!