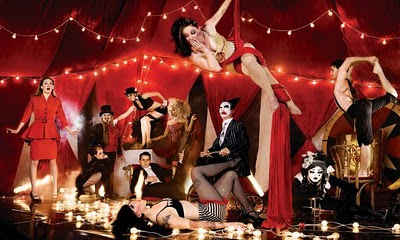 a kate west review
written by Suzanne Bernel, Kevin Bourque, Neal Everett, Barry Primus
music by Kevin Bourque
choreography by John Carrafa
directed by Barry Primus
at Club Nokia
800 West Olympic Boulevard
Los Angeles, CA 90015
contact (213) 765-7000 or http://www.clubnokia.com/
running January 7-30
Add a little Tim Burton-esque goth to a cirque-de-soleil style circus troupe and you get Cirque Berzerk, now playing in downtown Los Angeles' Club Nokia. Not the same top notch flawlessness as the Soleil troupe, but Berzerk definitely still has talent.
The theme is death (very in your face all evening) and a simple plot of a girl dressed in red (Emilie Livingston) who descends into hell, or purgatory or something, and is slowly seduced by the depravity of the departed. Everyone else is wearing black, including quite a number of audience members (so keep that in mind when dressing for the evening). Death himself (Kevin Bourque, also one of the creators) makes an appearance or two and harasses our heroine throughout the night. Clinging from brass rails and perching on cane-backs are the motley crew of the deceased, all cavorting and writhing in the background, to give us a sense of menace.
Aside from the basic plot of corrupting an innocent, there is not much else to the story, so it must be fleshed out with death-defying circus acts, like fire-swallowing, the requisite trapeze acts, bungee artists, contortionists and dancers and women on silks. The best act happens in the first half when four virile men bounce off a wall dividing two trampolines (Wesley Hatfield, Michael Hill, Michael Redinger and Russel Stark). They suspend horizontally in mid-air, zooming back to do it all over again. Very well done. A flexible young Hayley Kent bends backwards, while walking on her hands as if it weren't impossible and Neal Everett and Tavi Stutz spin on straps with the strongest, tautest muscles you've ever seen. Suzanne Bernel (also co-founder) has a nice turn on long red silks and our lady in red (Livingston) gets in some twirling herself by the end.
We also have a very basic clown (Brady Spindel) on stilts who pops in from time to time. Don't worry, there is no audience participation during the main show. We even have a little person as a petulant Madame (Katrina Kemp). Then there are three sirens (Antonia Bath, Jessice Childress and Gretchen McNeil) who wail mysteriously to a live band. The music isn't as apropos as a soleil show, but it works in the goth world.
Not that all these physical feats aren't amazingly and properly impressive, but that's pretty much it for the show. We get the theme once we take our seats, so the macabre starts to be a tad repetitive. The "plot" is the weakest link, but no matter since we have so much to look at with all the jumping and bondage style clothes (thank Mikiko Nagao and Heather Goodman). Plus the theater is done up in a cabaret style setting, the multi-lounges are fun and cool and the decor is goth retro. You can even browse some gypsy-like vending tables and buy leather, while munching popcorn.
They do create an agreeable carnival atmosphere so it's just as much fun to oggle the patrons as it is the performers, and since you'll get to meet both, if you're so inclined, you be the final judge.
Read more! 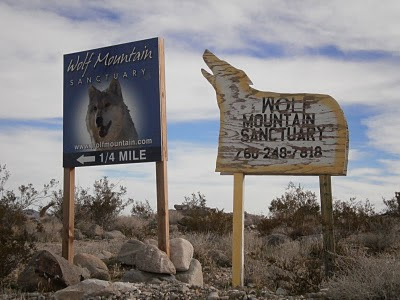 Today I ran with the wolves.

The Wolf Mountain Sanctuary, in the rocky desert terrain of Lucerne Valley (http://www.wolfmountain.com), houses rescued wild wolves, ranging from Alaskan grays to inbred accidents. Most of them are used to snow and cold so aren’t always happy with the blistering sun of the Mojave. Luckily for them, it’s been rather colder than usual this year. Tonya Littlewolf is their human Matriarch and has been in this location for “25 years too long”. They used to be on freer land, where the wolves could range far and wide (under proper supervision, of course), but due to leasing laws were relocated to Lucerne and are now kept in pens. Littlewolf hopes to move to Durango, Colorado soon and raise bison, along with her beloved wolves, but the money has not miraculously materialized to date.

Still, miracles continue to occur in smaller does, as when a Mexican family appeared outside the compound and set up a barbeque, settling in for a long stay. When Littlewolf ventured out to see what was going on, the only English-speaker, a little girl, told her that her grandmother had a dream about a Native American with blue eyes, surrounded by wolves. When they researched this, Tonya’s wolf preserve came up and the old woman recognized Tonya from her dream, so they all headed up to Lucerne Valley, sans vital directions (you can’t get here without them and they aren’t on the website). Tonya let them in immediately and the diabetic grandmother went straight over to the two healing wolves. They rubbed and licked her black legs and she said she felt better. After they’d gone, the little girl wrote to say that her grandmother’s diabetes was gone and her legs were as white as the rest of her.

In addition to the Holy Woman Littlewolf (she does not like to be called a Shaman), are several volunteers and dedicated family members, all tending to the expensive wolves. The electricity bill is astronomical in the summer, as they try to keep the wolves cool - then feeding them and bringing in the vet costs a pretty penny as well. The meat part isn’t so bad though, as it is apparently easier to get cast-off filet mignon than one might imagine. It’s no picnic keeping everyone fed and happy, but they are surprisingly resourceful and generous. In fact, the vet was there the day I visited and told me Tonya cured her arm pain, just by touch. With all the political nonsense they put up with, they manage to hold on to the positive vibe as well. Kudos for maintaining the center of peace they way they do.

As for me, I drove my rental pick-up from the 15 (you can keep going to Vegas that way) to the increasingly deserted landscape of Apple and Lucerne Valley along Highway 18. You pass signs with Native American names and see fewer and fewer cars and more and more boulders and cacti, or Joshua trees. Finally, you come to a couple of signs pointing out the sanctuary and pick you way carefully down a pitted, gravel, crazily bumpy road (the pick-up was definitely a good idea, but if worse comes to worst, you can always leave your sedan on a turnout and walk the quarter mile).

Friendly volunteers and pets (two dogs and a cat, at last count) greeted me inside the gate and everyone was warm and helpful. While waiting for Tonya, I signed liability papers (I was about to interact with wild animals, after all), and chatted with Tonya’s daughters. I signed up for the private tour so when my turn came up, we made the feeding rounds, greeting each wolf. There are so many (16!) and some have their own pen and some share. And some of them were even models for wolves in the movie TWILIGHT NEW MOON (http://www.wolfmountain.com/Twilight%20-%20New%20Moon.htm) so if you want to see movie inspiration, up close and personal, here’s your chance. You won’t be able to touch the TWILIGHT wolves, but they sure are pretty to look at.

Not all of the wolves are people-friendly and not all of the “safe” wolves are available all the time. When I went, I could only visit two of them, since the rest were in heat and not as um, restrained. All of them are fixed, but the drive is still there, so better to come back in February when the heat has died down (plus then, I was promised a cuddle with wolf cubs – I’m guessing from another site with unsprayed animals?) Tonya said I had a good spirit and probably a wolf side, which I am inclined to agree with. I felt in good hands, since she is definitely the Mama Alpha and the wolves obey her without question.

My first wolf sat behind me on a boulder and Tonya directed him to “hug me” with his paws. They are quite heavy and oh, so big and very much not dogs. Your inclination is to treat them like a dog because of the similarity, but make no mistake, you are among wild animals, so all their energy and connectivity is completely different (ask about their jaw strength). I was grateful they tolerated me at all. I actually got to pet two of them, including the sweet older wolf, Segoni. He just wanted to wander a bit and then sleep a lot. Tonya told me a couple of her favorite wolves had died recently, one from old age and one from eating a rawhide toy they had repeatedly asked tourists not to give him. She can still see their spirits in the pens, when they choose to visit their brothers. Apparently, some of my pictures came out with inexplicable lights, which Tonya was convinced came from wolf spirits.

The rest of the tour came with listening to dreams and stories, followed by wandering the walkways to film wolves. The neighbors complain about being afraid and of the constant howling, of which I saw no evidence. You can sign a petition at the end, verifying this if you are so inclined. The wolves are no threat and as usual, are misunderstood from every angle it seems, so if you visit, please spread the word. You’d think Hollywood would be more helpful to their werewolf inspirations.

It’s a great place to spend the day – the private tour is the most expensive, but you can do the speed-through version for $25. You’ll have less interaction, but anyone can see the wolves once there as the pens are out in the open. You’ll marvel at how big they are (especially their paws, which are webbed for natural snowshoes, as I found out). They always have specials and you are always welcome. You must make a reservation and you must be respectful (there’s a long list of rules to follow). No matter when you go however, it will be the experience of a lifetime and how many people can say they touched a wolf? I’ll never be the same and feel honored to have met (and been hugged by) a Littlewolf. 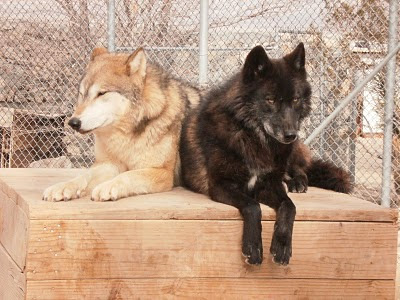