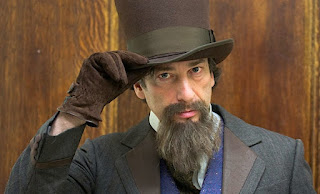 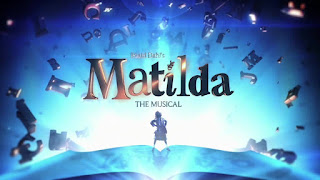 Roald Dahl's cheeky heroine Matilda leapt from page to screen (Mara Wilson) to musical. After winning numerous awards in London (seven Oliviers) and New York (five Tonys) the hit show is now on tour in our own San Francisco, currently at the Orpheum Theatre.

Gabrielle Gutierrez (matinee performance) is Matilda, the precociously gifted and neglected daughter of dud parents, the Wormwoods. She reads for pleasure, much to the scandal and chagrin of her tv (telly) addicted mum and dad. Spending as much time at the library as she can, she weaves fantasies that intersect with reality and might even have a few special powers of her own. She needs them too, as she is soon sent to the dark and dreary Crunchem Hall Elementary School, where she faces the terrible headmistress Miss Trunchbull.

Bryce Ryness is Miss Trunchbull and is every bit as horrifying and hysterical as the villain in book and screen. Hair tightly bound in a severe bun, clothes militaristic and demeanor ferocious, Trunchbull makes the children's lives a living hell ("The Hammer" and "The Smell of Rebellion"). Ryness steals the show as he strides into the Trunchbull scenes with timely maneuvers of a pro. Equally fantastic is Quinn Mattfeld as the dishonest car salesman and unappreciative father of Matilda, Mr. Wormwood. The hoots and hollers of their curtain calls alone speak to their distinctive performances. 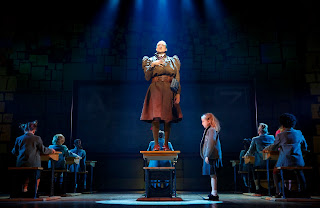 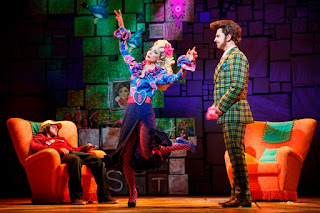 Cassie Silva and Quinn Mattfeld as Mr. and Mrs. Wormwood

Cassie Silva matches Mattfeld in energy as the vainly ditzy Mrs. Wormwood, however it was difficult to understand her higher register at times. In fact, many of the children were almost indecipherable when singing, and sometimes when speaking. The producers understood this potential problem (does it have something to do with the striking British accents or just the usual misinterpretation of song lyrics?) and provided the audience with a display for reading along with the text, à la opera translator, but that may have been a little far to strain to read for the balcony crowd. They did provide a synopsis in the program however, so make sure you read that carefully before the show. Or better yet, read the book! Or for those with a tv (telly) addiction, watch the movie. 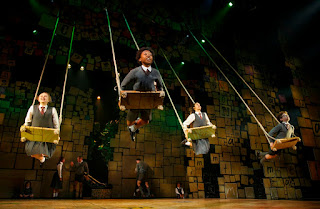 Matilda is a delightful show and a wonderful character and will hold younger audiences captive, as well as entertain the grown-ups with that quintessential Roald Dahl quirky wickedness. Jennifer Blood as Miss Honey offers the softer performance, to contrast the evil surrounding our main character, and is ultimately her savior of sorts (though Matilda certainly knows how to take care of herself - girls, take note of that resolute self-reliance).

Rob Howell provides an innovative and imaginative set, while Peter Darling compliments it nicely with joyful choreography and director Matthew Warchus does a fine job painting the big picture. True, there are many harsh moments ("School Song" and "The Chokey Chant"), done with feverous revel, but there are poignant times as well ("Miracle", "This Little Girl" and "When I Grow Up"). So there is something for everyone. And other than the intense concentration needed to follow the plot (can't relax into escapist mode here) it is a super fun show. Read more! 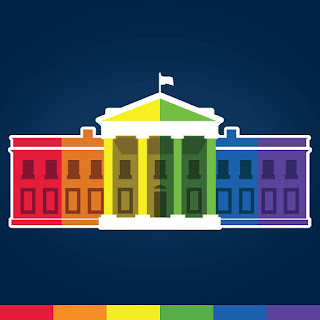 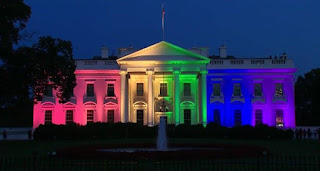 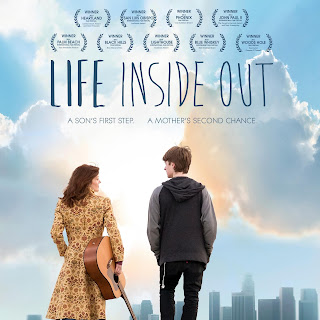 Update: Recently re-watched Life Inside Out and am once again struck by its sincerity and how the on-screen mom is so like the off-screen mom (Billie & Finneas' mom!) in nurturing her children's creativity and supporting their individuality. Truly remarkable parenting all around. Kudos to everyone involved. What am amazing and lovely family.

The independent film Life Inside Out is a wonderfully subtle portrait of motherhood. It is a lovely and simple love letter from mother to son, depicting the purest kind of gentle love. A hit at many film festivals, you can now find this movie (and cool soundtrack) online.

Maggie Baird stars as Laura, who longs to go back to her musical roots and maybe find more meaning than her full time mom duties. We can all use a little extra creativity in our lives, after all. During her introspective journey to get there, she draws out her reclusive son Shane (Baird's real life son Finneas O'Connell - yes, of Glee fame). Her eventual sacrifice for her son proves that a mother's love is the truest bond, especially if she is true to herself first. It is so nice to see a female lead showing compassion and generosity for others, without losing her identity. In finding her own heart, Laura is able to share it with her friends and family all the more readily.

This is a sweetly delicate story, with relatively little of the modern indie angst so prevalent in many tediously drawn-out "hip" films (looking at you Cake). Also fun is watching a genuinely talented musical family work together to create a heartfelt movie that resonates with anyone who has ever wanted to perform. Or help someone else discover their true talent and calling. Must have been awfully nice to grow up around that well-loved living room piano.

The movie has a wide appeal and the entire cast is interesting and watchable. The atmosphere is cozy and the music is soothing, yet vibrant (check out The Slightlys - you may even recognize the lead actor). Director Jill D'Agnenica did a great job. It is definitely worth giving it a go.

You can get the music here.

Please take a visit here if you want to know all there is to know, and all there ever was to know about Olympics: http://www.gamesandrings.com. 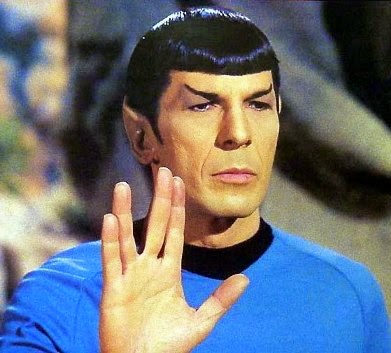