Wake Up Your Weird! 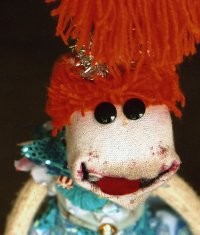 Leslie Carrara-Rudolph is weird. So weird in fact, that she made a whole show about it; she's actually super proud of her weirdness, so she started a whole movement here. You can see part of that weirdness in her puppet show, "Wake Up Your Weird!" starring Leslie's (sort of) alter-ego, Lolly Lardpop, a feisty, red-haired (yarned?) sock puppet.

Lolly just wants to fit in (don't we all?) so she tries to befriends some other girly puppets but they won't accept her. So she needs to find a way to accept herself and teach the children in the audience how to do that for themselves too. Leslie achieves this magical feat beautifully, through adventurous storytelling with some fantastically memorable characters. Oh, and songs. And projections. There's a bit of everything in this show and it's funny enough to entertain the adults too.

Cleverness abounds so pay close attention to little quirky details here and there. And also watch for a sheepish fairy godmother, a lovable wise old grandma and maybe a few monsters. There's even a whole number about a brain. Tiny children may be a bit frightened, but school children will love it and even get to participate. Parents, if you're good, you can too. It's in two acts: the first act is Lolly and Leslie's story of self-esteem and discovery. Being weird is O.K., if that's truly who you are. The second act is mostly playing with the kids in the audience so it may seem a bit like two different shows. Some adults popped off for drinks by then (this particular day the show set up in a bar/restaurant), but if you stick around you can hoot and holler and let off some of that corporate steam from your work week.

Whichever act you prefer, the best magic is Leslie herself. She's a true performer in that triple threat kind of way (and no wonder, with "Sesame Street" and Henson credits). She sings, dances, yells, yelps, growls and voices innumerable characters in seemingly tireless and effortless fashion. She is joy personified on stage and you can't help but get a little infected by her Lolly light. She and the adorably irrepressible Lolly will meet you after the show, if you want to thank them personally for that spark of happiness. Whatever technical glitches occur in the early versions of this show are more than compensated by Leslie's genuine enthusiasm and contagious love of creativity.

So if you want to teach your child to open his or her mind and heart, or need a reminder for yourself, this is the show to see. "Never underestimate the power of JOY!" Read more!

Jonathan Shue - In The Valley of Heart's Delight 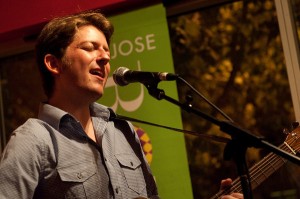 Local San Francisco artist Jonathan Shue knows his way around a guitar. And some compelling lyrics. With the album "In The Valley of Heart's Delight", he serenades us on relationship woes (to name one recurring theme), spun to lovely strumming on his guitar (and the occasional harmonica).

The songs here are definitely universally relatable and pretty enough to keep you listening. "Honesty Gets Me In Trouble" in particular, captures an amusing take on why some guys can't help saying the wrong thing at the wrong time. "Ballad of Rene Vallaincourt" adds some western mystique, with a tang of tolerable country. Echoes of folk music drift in and out of some of his work too, in the nicest way possible.

The best piece, however, is the softly subtle "Bartholomew", about the musings of a dreamer. Because it is so brimming with visual possibilities, Shue commissioned a local production company Two Plush Two (who also know their way around a good story), to showcase one of their adorably popular videos featuring "Bartholomew" (separate review here). The resulting collaboration is sweetly wistful and perfectly executed. Catch the magic below. And remember to pass on the good feelings!

SONGS
1. Honesty Gets Me In Trouble
2. Chasing Hurricanes
3. Cryin For That Kiss
4. Bartholomew
5. Orangecoat
6. Ballad of Rene Vallaincourt
http://jonathanshue.com/

To see true artistry at it's synergetic best, watch the new video by Two Plush Two Productions below: 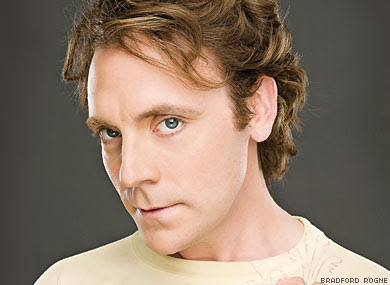 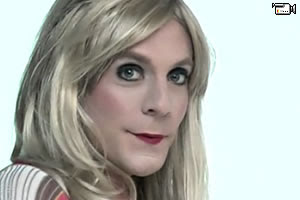 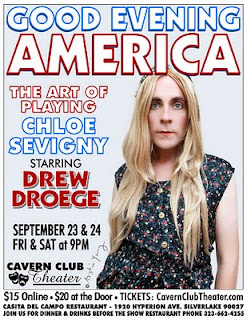 
Get on the mailing list to find out more:
http://cavernclubtheater.com/DREW.HTML
Now watch Chloë do Drew!
http://www.youtube.com/watch?v=8zB13phSgNE
Read more!