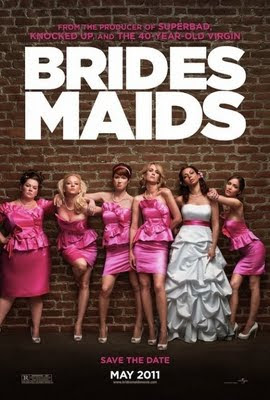 
To call the new female comedy "Bridesmaids" a chick flick is to do it a disservice. It's a little bit of that, sure, but mostly it's so much more. It's really about the changing dynamics of friendships, the kind you have with old friends, with new friends and especially with yourself. But don't worry, fans of slapstick will get to enjoy some outrageous bathroom humor too, thrown in for good measure (if you're squeamish, beware the dress fitting scene).

Kristin Wiig (SNL) co-writes her first starring role as Annie, a struggling business entrepreneur who is thrown into wedding planning hell in the middle of her own personal crisis. Her best friend Lillian (Maya Rudolph, another SNL-er) is getting married and wants her to be the maid of honor. After her initial shock (and spurt of jealousy) wears off, Annie pulls herself together and tries really, really hard to make her friend happy. But it's a herculean task to create true beauty when you are truly miserable. Loveless, jobless and homeless, she makes every effort to show her friend how much she loves her, but is thwarted at every turn, primarily by her bridesmaid rival and nemesis, the impossibly beautiful and perfect Helen (Rose Byrne), not to mention hilarious little daily reminders of how much her life sucks. As things get worse and worse, the scenes get funnier and funnier, until the inevitable climax (no spoilers here).


What makes this movie work so well is the terrific ensemble cast for one thing, many of them from Wiig's day as a Groundling. Wendi McLendon-Covey (RENO 911!) is hilarious as a jaded and harried mother of monsters, balancing out Ellie Kemper (THE OFFICE) as the sweetly, naive newlywed. They are great foils to each other. Melissa McCarthy (MIKE AND MOLLY) is the real scene-stealer of the wedding crew, with impromptu rants of insanity that have to be seen and heard to be believed. The side characters are loads of fun too (Jon Hamm's slimy playboy, Jill Clayburgh's mother and the adorable Irish cop Rhodes, played by Chris O'Dowd, Rebel Wilson and Matt Lucas' nutty roommates, flight attendants Mitch Silpa, Dana Powell and Ben Falcone's mysterious airplane passenger, the stuffy boss Mike Hitchcock, to name but a few gems).


Through all that comedic genius however, is the touching friendship between Annie and Lillian, played with real poignancy by Rudolph and Wiig. Wiig's despairing looks as her life falls apart absolutely hit home with the viewers. We can feel her pain, while laughing at how extreme everything becomes. Just when you think it can't get any worse, of course it does. Exaggerate the tragedy and you've got humor. You haven't seen funny until you watch Wiig try to push over a solid fountain (or hallucinate a butter-churning pioneer woman). Her facial expressions alone say so much with so little effort on her part. She simply lives Annie.


Then there's the writing. Kristen Wiig and Annie Mumulo (look for a cameo on the plane ride from hell scene) co-write a compelling human drama depicted by laughter. The essential things that happen, the losing of things, of self, we can all relate to, yet they are taken so outlandishly far it is safe to revel at the characters downfall. At the core of the story is of course sincere emotion, so we always root for poor Annie. She's pretty much our human condition, at one point or another in our lives, just trying to keep her head above water while the universe continues to hurl ridiculousness at her. Wiig and Mumulo demonstrate this truth very well. But there will be redemption, too - Annie's attempt to save her friendship ahead of her own needs will end up saving her own life.


On the surface though, the entire movie is non-stop fun. Director Paul Feig (KNOCKED UP) apparently allowed his actors to improvise in many scenes, giving them added spontaneity, though some of it could have been edited a little tighter. Some parts went on a tad too long at times so the pacing is sometimes off. But as a whole, the story works as a classic comedy, through ups and downs, and we are right there with the main character. Based on general audience reaction opening weekend, you will laugh until you cry.


So for the studio executives breathlessly waiting to see how BRIDESMAIDS does at the box office, congratulations. Yes damn it, women are funny and can write and deserve to be funded. Just ask Tina Fey. Well done ladies.