Oh Joss, I've been waiting for months (years!) for you to return to us, bringing more sci-fi witticisms and action-packed supernatural romance with interesting and steady character development. I think I classify as a fanatic as I've been forced to follow "Angel" and "Buffy" adventures in comic book form, something relatively new to me. But thank you. I re-watch my DVDS and then pull out "Firefly" and "Serenity" in between vampire stores. I even followed "Dr. Horrible's Sing-Along Blog" online. I qualify.

So of course I was beside myself with joy to see that good old Vampire Slayer Faith (Eliza Dushku) was returning to your story lines in a brand new Joss Whedon creation, "Dollhouse" as Echo (cool name!) In an "Alias" inspired scenario, young people are unwittingly recruited by a mysterious organization as spies for various nefarious purposes (changes every week). The catch is that each recruit has his or her memory wiped clean between jobs and then sent out anew on the next mission. Will Echo figure this out somehow?

The show doesn't grab me. The characters don't inspire followers and no one is sympathetic. Not only has the whole sleeper soldier thing has been done before, but without your normally rich contemporary dialogue, I'm not interested in seeing how it develops. Or doesn't. It breaks my heart, but your new series doesn't work and after struggling through two painful episodes, I can't bring myself to tune in again. It lacks that heart, the key to relating to your protagonist - I can't indentify with this blank slate of a woman. Maybe you were overly ambitious or got some bad advice? Whatever it is, I wish you luck with the show and hope it gets better, but I probably won't be watching. 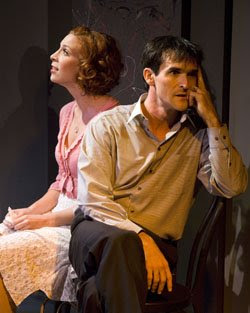 The best way to deal with a divorce is from a distance. In the midst of the raw newness, when dealing with a former love as immovable and unfeeling as stone, you are swept away rudderless in a sea of pain. Photo albums are surreal; suddenly you're looking at two strangers, and all those years together washed away in an instant. You are turned inside out and your heart floods your head, so that thinking coherently is no longer possible and you just need to go crawl into that hollow cave of grief until you can deal with normal life skipping by once more. When all that is over and done with however, maybe you can finally laugh about it. Maybe even sing a little. Or hey, even write a musical.

Rick Segall and Lowe Taylor are Rich and Penny Hughes, a bright-eyed, optimistic young couple excitedly singing wedding vows at the top of the show ("Till Death Do Us Part"), only to be arguing in a marriage counselor's (Gabrielle Wagner) office a mere three years later (i.e. the very next scene). It can happen that fast. And seems to, more and more lately, especially in our current economic crisis. But back to the show.

The Hughes couple drifts further and further apart, until the money-hungry lawyers devour every last morsel of property. Rich and Penny try their best, like awkwardly attempting to move on with one-night stands in a hilarious musical number "Rebound Sex" which still resonates with the pain of lost love. The lawyers grow progressively more evil and in spite of having every intention of keeping things civil, the couple also succumbs to petty revenge. In between flashy dance routines, the actors sing poignant lyrics on dead love ("There Were Good Things").

Director Rick Sparks and Musical Director David O create some memorable scenes, such as a game show version of divorce mediation. Erin Kamler's lyrics are universally real, hitting home with various audience members (you can always tell the divorcees). Rick Segall is a strong and fervent lost lover, the ex-husband struggling to make sense of his life. Lowe Taylor balances perplexity, horror, despair and longing seamlessly. The two work quite well together, jumping from all the different ranges of emotion, playing off each other exactly the way ex-lovers would. The singing is plentiful and good, especially noted in Taylor's passionate voice. The rest of the talented ensemble, Gabrielle Wagner, Leslie Stevens and Gregory Franklin, play the various friends, lawyers and even parents, in and out of the couple's public break-up. Yes, one of them ends up back with the folks. Will the torture never end?

It is a heart-weary piece, and at barely an hour and a half, it felt like some of the characters might have been fleshed out a bit more. For instance, the do-good lawyer (Leslie Stevens) is seduced to the dark side a tad too quickly and the couple never does make it to court, which might have made for a grander climax, so to speak. But altogether it's a remarkably fun show, in spite of the bitter story. The gist of the show is clear - don't count on happy endings. This is definitely a tough look at divorce (is there any other way to look at it?) and though short, it is well written and oh, so very real. In the end, the couple is able to hold on to parts of the relationship and the memory of how it felt to fall in love in that 'till-death-do-us-part kind of way. Is it possible to remain friends with your ex? Probably not in this show. But anyone can relate to the feelings laid bare here. We've all been there, right?

So it's not quite the typical Hollywood feel-good, but the music is very good, the cast is wonderful and it's all too true. Happy Valentine's Day.

UPDATE: Apparently Producer Rick Culbertson proposed to Playwright Erin Kamler on Opening Night, on yes, Valentine's Day (she accepted), proving there is hope for us all. Whew! Read more!

Eat, Pray, Love and Think for Yourself

Elizabeth Gilbert, author of the sensational autobiography "Eat, Pray, Love", is spreading the gospel of self and creative genius. She's good at this, having written a compelling account of her own spiritual awareness. So she's the perfect person to lecture people on how to find and nurture creativity. I don't have a problem with this or with her but I am annoyed by the mindlessness of some of her fans.

As parodied in Monty Python's brilliant "Life of Brian", the Messiah never said anything funny or anything you can poke fun at and Python never did. What they made fun of was the unthinking masses who refused to think for themselves, despite poor Brian's pleading. He didn't ask to be a leader - it was thrust upon him.

Gilbert, while certainly no Messiah, didn't ask either. She just wanted to tell her story and then after months of enjoying the bestseller list, she now has to deal with rabid fans following in her literal footsteps, so to speak. Confessing on "Oprah" that they went to all the same spots and met all the same people as in the book, these women glow with the satisfaction of having achieved some sort of enlightenment. But they haven't. They didn't find their own path - they followed Gilbert's. Maddening. Live your own story and then you can write about it - don't steal someone else's.

That being said, the video below really is a fascinating and appealing way to look at creativity. Just please, find your own genie.