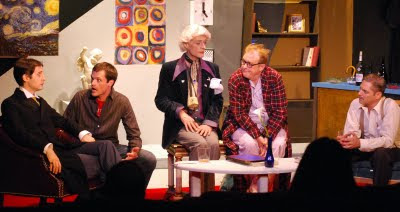 Remember the question, "who would you most like to have dinner with, living or dead?" How about Truman Capote, Quentin Crisp, Oscar Wilde and Tennessee Williams? Or maybe even William Shakespeare? Playwright Jeffrey Hartgraves expands on that idea with a visit to the after life in "Carved in Stone".
Gryphon Tott (Levi Damione), an aspiring writer, dies suddenly in a train station and immediately finds himself in every reader's dream situation - being able to talk to his favorite authors, all of whom happen to be dead. Oh, and gay. In a common sitting room, and in denial about a few things, in death as in life, Tott eventually admits the truth about himself, to the surprise of all. Director John Pabros Clark (who also designed the cozy set) presents an amusing and witty look at Hartgraves version of what might happen if all these literary giants had a chance to mingle and pry into their lives. And make fun of each other mercilessly.
Kevin Remington is amazing as Capote, as he not only captures the voice and mannerisms perfectly, but makes it his own, with natural-sounding rapid-fire dialogue, as if there were no script at all. Curt Bonnem is a very sexy Williams, Jesse Merlin is a rumbling baritone and quite delightfully dry Wilde and Leon Acord plays Crisp with proper demure affection. Most definitely portrayed by strong actors, the rapport amongst these characters plays beautifully real and each one of them has something fascinating to impart. One could listen to these four wonderful performers for days.
Levi Damione, as the new author Tott, is a bit weaker, however, not having a famous personality to impart, but his presence does give something for the others to focus on. In addition, Alex Egan and Amanda Abel come in and out of the stage, as various characters, from Gertrude Stein and Alice Toklas, to Frank Nelson and Judy Garland, and with a special Shakespearean appearance (Egan). They are fine as some added comic relief, but it is rather confusing to have some seemingly arbitrary famous non-literary characters pop in from time to time, although gay icons are frequently mentioned. More perplexing though, for some reason they are not allowed to interact with the main players. You do get some good musical numbers however, and maybe that is enough to entertain.
Overall, it is great fun to watch the drama unfold, as Tott tries to figure out why he is the one selected for this divine privilege. It's not Shakespeare, so to speak, but it is a play about love of literature and it is obvious the playwright had great respect for these legends. As do we. This particular evening had a few barely noticeable technical glitches, which hardly seems to matter in the big scheme of it all, as the show has been extended through the fall. So brush up on your classics and come get some insight into genius for a while. Have a shot of bourbon afterwards.