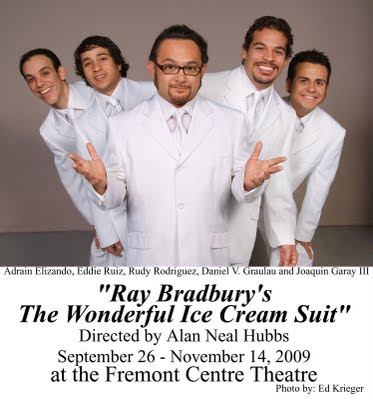 Ray Bradbury loves Los Angeles. In fact, he spent much of his twenties downtown, living in a Latino district and writing down every conversation he overheard. In 1957, fascinated by this East Los Angeles culture, the celebrated Pulitzer Prize winning author wrote a short story for the Saturday Evening Post and later turned it into a play in 1972. Best known as "The Wonderful Ice Cream Suit", the charming story has had many manifestations, including a musical and then a film starring Esai Morales, Edward James Olmos and Joe Montegna in 1998. The Fremont Centre Theatre in Pasadena now brings back an encore run of "Ice Cream Suit", with Bradbury's blessings (in attendance opening night when he recounted a bit of the history behind the piece).

Five Hispanic men invest together in a beautiful suit, as pure and white as vanilla ice cream. Since none of them can afford it on their own, they all pool their money and vow to share it, each of them getting a brief moment of glory wearing the suit. Gomez (Rudy Rodriguez), the brains of the outfit, so to speak, collects the money from his friends. Each suit wearer has a designated time to strut out on the town and become a ladies magnet or a chance to briefly live out whatever realization of his personal dream fantasy he might envision.

Of course, not everyone can be trusted to take immaculate care of clothes, as evidenced by the vagrant Vamenos (Daniel V. Graulau), who is constantly tripping over things and making a mess. Villanazul (Joaquin Garay III), Martinez (Eddie Ruiz) and Dominguez (Adrian Elizondo) round out the rest of the wild bunch who cherish their time of magic. In a relatively short time (and with no intermission), we see each person's desires fulfilled, including the aftermath of Vamenos' thoughtless outing.

Bradbury's lovely dialogue is purposely poetic and lyrical, adding dimension to the rather supernatural allure of the suit. The actors struggle a little bit in finding a natural rhythm, but each character is earnestly likeable. One moment includes literally spotlighting the suit, technically and musically (a nice touch). The final bar scene is amusing as well (but fair warning: strobe lights are lengthily utilized). It is easy to see how the story could be transformed into a musical, as the lines are made to be joyously sung. The late John Edw. Blakenchip designed the fun stylistic set with graffiti-inspired murals, adding to the theme of beauty. Director Alan Neal Hubbs could have emphasized more of the sing-song out-of-reality feel (akin to Dylan Thomas' "Under Milkwood"), but the play is still entertaining and a big hit with the weekend audience.

One puzzling moment occurs when Gomez (Rudy Rodriguez) explains that he hand-picked each man for similar size and build but the actors clearly don't match, so one wonders if it is part of the inexplicable magic of the show, or just an inconvenience in casting. In addition, the actors are all fine, but might want to watch their pacing, as we need to soak in the important flow of words (particularly Garay as political intellectual Villanazul, who is funny, but just needs to slow down a tad). Graulau is the real comic relief as the bumbling Vamenos and does well, as does Elizondo as the sauve Dominguez. Verona Mansongsong is very pretty as Celia Obregon, the ideal love of Martinez (the young Eddie Ruiz), and some of the other random characters are weaker than others.

Overall, the actors need to be careful to continue balancing the stylistic acting with the grounded humanity of their characters and will probably get the hang of it in future performances. Again, the cast completely won over the crowd and the production is absolutely worth seeing, if for the auditory pleasure alone. On this particular evening, the real magic happened when Bradbury stayed to sign every book and program brought to his lap. Very gracious and in love with life, he is a real delight to listen to and to hear his wonderful words brought to life. So kudos to Fremont Center Theatre for indulging the Sci-Fi Master. If only it were as easy as donning a magical suit to find a magical life. And if anyone can make that happen, Mr. Bradbury can. Viva.