Alice in Wonderland in 3D 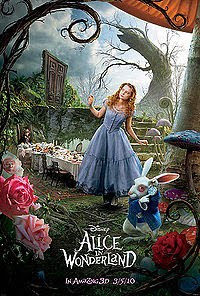 The much-anticipated new Tim Burton project "Alice in Wonderland" has finally arrived. Combining Burton's distinct cult status and Walt Disney's immense marketing machine ensures there is no way you haven't heard of this movie. But whether it actually lives up to the year-long hype remains to be seen.

First off, it's yet another take-off/adaptation of a classic children's story; this time of the enduring tales "Alice in Wonderland" and "Through the Looking Glass" by Lewis Carroll. In this version, Alice is a young woman tumbling down the rabbit hole once again in order to escape a dreaded marriage. To her surprise, her childhood dreams of Wonderland (called Underland here) are all real. There is a brief nod to the well-known story, but the rest is all conjecture. Alice must fight the Jabberwocky and save Underland from the evil Red Queen, restoring the crown to the White Queen. During her arduous journey she reunites with old characters like the Mad Hatter, the Caterpillar and of course, the White Rabbit. While the personalities are fairly intact, the plot takes several jarring turns.

Mia Wasikowska is Alice, who must decide whether or not to take on great responsibility, in both her normal and other-world life. She gives an intense performance on heroism and will undoubtedly inspire little girls to stand up for themselves. She holds her own against monsters and villains and unlike the Alice from the books, she makes genuine friendships, especially with the manic Mad Hatter (Johnny Depp). Helena Bonham Carter's digitally bloated head as the Red Queen is quite disturbing, but effective in conveying petulant madness. Her shrill magnificence works well, as does Anne Hathaway's dreamily psychotic White Queen. Alan Rickman is properly sage as the blue Caterpillar and Christopher Lee has a brief, but ominous turn as the Jabberwocky, when Alice ends up confronting demons, literally and figuratively. The mix of digital vs live action is a tad perplexing, however. Tweedledee and Tweedledum (Matt Lucas) are CGI as is the March Hare (Michael Sheen), but Alice, the White Queen and the Mad Hatter are as real as, well, can be imagined in this fanciful world.

The visuals are stunning, as is Burton's rich imagination, but really has so little to do with the core of the story that one wonders why he didn't just call it something else. Naturally, returning to a childhood site is never as one imagines, but this veers so far off track that it is bound to disappoint some literary die-hards. And the especially unfortunate choice of having Depp's Mad Hatter finish with a bizarrely inappropriate modern dance reminds us that the movie is really pop culture at its best and not in keeping with classic literature, even as a childish homage.

Unfortunate, because there are some good ideas here like dragon-slaying and prison breaks, but none of them are nostalgic nods. More like frenetic hypothesis. It's not a bad movie and parts of it are interesting indeed; it just doesn't live up expectation. And if you are going to spend over a year enticing us with scrumptious ads, please make sure you keep a good script. The story is what is important, over special effects and celebrity names. At heart, we want to remember what it's like to fall down that hole and wonder what it would be like to shrink down to toddler size again. A different perspective can always fix a little social anxiety. 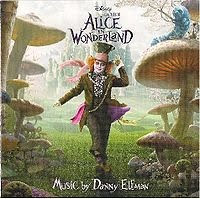 You can find the soundtrack here:

The Annotated Alice: The Definitive Edition