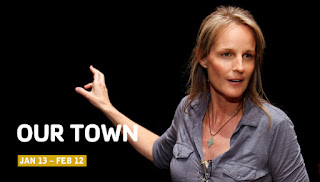 You can't get much more small town America than Grover's Corners, New Hampshire. In 1938, Thornton Wilder captured our reverence for nostalgia so very well in his Pulitzer Prize-winning play "Our Town", set in the fictional East coast town, more or less around the first World War. And aspiring acting students have been rehearsing it for ages since. Director David Cromer brings the latest adaptation straight from the Big Apple, with his modern Broadway take on this American classic. It's easy to dismiss the work you were force-fed in school, but read it again as an adult and you might come to appreciate its profound message about life, love, aging and of course, the inevitability of death.

Helen Hunt ("Mad About You", "As Good As It Gets") plays the Stage Manager, usually reserved for a folksy older Mark Twain-ish fellow (think Hal Holbrook). While that role does not necessarily have to be gender specific, it is traditionally depicted as a wise and kindly all-knowing observer. Hunt is matter of fact, which is fine, despite her tendency towards mannerisms, but she does lack some warmth. However, she works well with the rest of the cast and you can't go wrong with excellent dialogue so she does keep our interest.

Grover's Corners is a typical happy little village with typical gossip and neighbors. Emily Webb (played sweetly by Jennifer Grace) marries her next-door-neighbor George Gibbs (the amusing James McMenamin) and generations happen. Scenes of soda fountains and sports at school and the local choir are all played out under a subtle shadow of war. Mothers and Fathers fret and argue, Milkmen and Paper Boys comment on the goings on while Hunt's Stage Manager fills us in behind the scenes. Wilder's general message is that life can be sweet and good, but is too often marred by tragedy and therefore should be all the more precious to most of us. Some of his clever devices include the audience being lectured by various townspeople like Professor Willard (David LM McIntyre) and Editor Webb (Tim Curtis) who regale us with the town facts, while the Stage Manager prompts the audience to answer prepared questions. A complete picture of the town is set up quite nicely in this charming fashion.

The stage itself initially has minimal props, essentially a couple of tables and chairs, and in this production the dress is modern, even though it is set in the early 1900's, the idea being to give us a sense of timelessness. However, seeing a teenager discuss a fifty cent raise with his father can be jarring when he's wearing jeans and sneakers. Director David Cromer does use the space quite well, until one of the last scenes when Emily goes back to visit her family and a true set is revealed, way in the back of the theater, with a fully functioning kitchen. One generally wears rose-colored glasses when looking into the past but it would be nice to be able to fully hear and see properly as well. The most famous monologue of the entire play takes place upstage, far away from the audience and you can barely make it out. The shadows of the past should be a bit more metaphorical in favor of giving us a satisfying ending.

Still, much of the staging works great. The wedding scene is nice and emotional, with poignant turns from Mothers Webb and Gibbs (Ronete Levenson and Lori Myers). Normally portrayed as the height of romantic fulfillment, this wedding shows us the reality of growing older and the fear of leaving youth behind. Hunt comments that one minute you are happily in your twenties and then suddenly you are seventy. It happens so very fast. The final act is done very well (with the exception of the kitchen scene) with stoic actors reflecting on the way the living don't see what's right in front of them and never take the time to fully enjoy and appreciate life while they are in it. Choir Director Simon Stimson (the sharp Jonathan Mastro) especially captures the bitterness of this realization.

All in all, the production will leave you with much to reflect upon. The actors are strong and there is even the occasional dramatic score (courtesy Jonathan Mastro), which adds a nice touch. Thornton Wilder is too often dismissed as a sentimentalist but this play has a lot of hard truths, which are far from sentimental. You will find despair and hope, love and anger and eventual acceptance, like much of life. Cromer is to be commended for a slightly modern take on an overdone piece of theater, but also needs to be careful not to undersell the more important parts of the play.

So do any of us figure out any of this life stuff before it's too late? According to Wilder, "The saints and poets, maybe - they do some." Take heed, folks - slow it down a little. And since we're being all modern - be your own Ferris Bueller.

Get your own copy here:
Our Town

Read more about it:
www.thorntonwilder.com