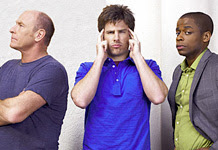 
I hate this show. Shawn Spencer (James Roday, pictured middle above), the pretend psychic, is obnoxiously cocky and every episode is the same exact scenario but with a different crime setting, kind of like a recurring Saturday Night Live character who does the same shtick but against different backgrounds. I just can't believe the other characters buy his act and I can't believe the viewers don't get tired of it. But then again, I detest arrogant smart-aleck men.

Spencer was trained as an expert observer by his cop father, Henry Spencer (Corbin Bernsen, pictured above left). The oh-so-sly "wax-on-wax-off" wisdom passed down from father to son show up in flashbacks such as little Shawn wanting the toy prize in a box of cereal, but sadly resigning himself to eat the whole darn box. Lo and behold, the father flips the box upside down and now the prize is on top. That makes him smarter than the poor real-life cops Spencer tortures? Apparently it qualifies him to pretend to be a psychic private investigator, but he really just pays attention to obvious clues, like unbuttoned shirts or what have you, that anyone with two eyes can plainly see. Except for the bumbling police, that is. Tedious.

Dulé Hill (pictured above right) plays Spencer's weary, stereotypically comic-relief partner Gus, who keeps saying this is the last time he'll put up with their extreme antics, but you know it's not true. They've got a show to sell. Just not to me. Great shows get axed ("Arrested Development"), but this one gets to stay. I even strongly prefer the universally panned "Studio 60 on the Sunset Strip", also nixed.