What IS it with our modern generation and everyone's constant need to over share? I know I sound old when I say this, but back in my day, we never told each other every single detail of our lives. None of this minute-to-minute update of life's minutia, sexual exploits, bathroom habits, every single damn thing each of us is thinking every single second. I don't need to know all that and neither does the rest of the world. What happened to privacy, decorum, tact and just plain class? Kids these days demand screaming attention in order to validate their existence and are uncomfortable with the more reserved. Isn't one of life's mysteries the actual mystery? And do I even have to complain about people on their cellphones? Private is now public apparently. Maybe this is an American problem and Europeans are grown ups and Americans are children. I often think so.

In any case, no wonder we exalt celebrities and people get famous simply for being famous and not for contributing significantly to society. We are fascinated with the fishbowl culture of needing to know everything about their private lives. Is it because it makes us feel better or are we just nosy? Believe it or not, I know next to nothing about several nameless super celebs apparently in the news lately - I don't watch FOX News or read PEOPLE and am told that I can't help knowing about it since that knowledge is everywhere, but honest to God, since I'm not looking for it or talking about it, I've missed it. Hooray for me.

Granted I watch too much television (but at least not the commercials). So I need to get back to reading. And avoiding the fishbowl. Yes, I will keep blogging (oh hush)!

p.s. And while I'm in the mood, can I once again complain about television characters mentioning other television characters from shows on the same network? Tacky boo. Oh and is it just me, or is it enough already with self-congratulating, self-absorbed Hollywooders and their insider everything (Oscars especially)? Ugh. 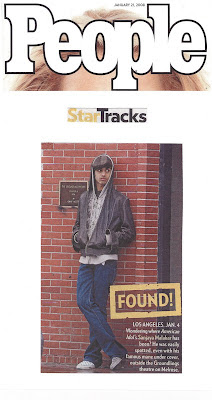