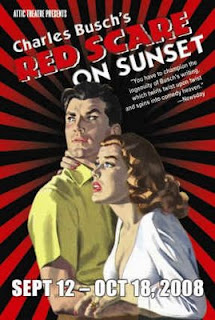 
Charles Busch, playwright, actor and drag queen extraordinaire, brings back his reflections on the 1950's Hollywood Blacklisting in "Red Scare on Sunset". Famous for such outrageouness as "Psycho Beach Party" and "Vampire Lesbians of Sodom", Busch often cast himself in the fabulously dressed female leads (www.charlesbusch.com). Filling in Charles Busch's high heeled shoes, is Drew Droege in the latest version of "Red Scare".

Droege takes on Busch's famous alter ego movie star Mary Dale, giving her his own full out drag flair. Mary's actor husband Frank Taggert (Chris Tarantino) is drawn into the Communist party against his will, subcombing to the dark Hollywood left. Best friend Pat Pilford (the delightfully fun Michelle Begley) supports Mary but still has to keep her own black secret. Mysterious Marta Towers (the rather weak Sona Tatoyan) gums up the works, making the moves on Taggert. Mary must save her husband and her career, all the while keeping herself in stylish couture. Busch tries to fit it all in - suicides and murder, sex and scandal and a reminder that even the entertainment industry can demonstrate intolerance.

The cast is unbalanced, some much weaker than others. Amy Proccaci has a few fun turns as R. G. Benson, a sharp-talking oldtime director, as does Dane Whitlock as various sexually ambiguous characters. Drew Droege and Michelle Begley are definite stand-outs, as well as being the best dressed. Some very fine delectable 1950's dresses, indeed. Director Cindy Gendrich makes some nice stage pictures and Droege has some priceless facial expressions as Mary sinks further and further into despair, to arise triumphant, strong and red-white-and-blue conservative in the end.

The company obviously enjoy their take on a Charles Busch classic and while it runs too long, it is fun to watch Droege expertly inhabit the intensely sheltered and delicate movie star who turns out to be much tougher than anyone suspected. He's the best thing about the show, pretty much. The actual story is almost secondary to showcasing that particular Charles Busch portrait. 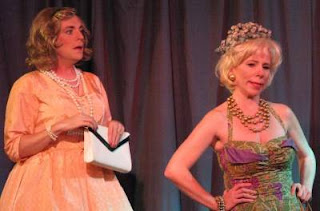 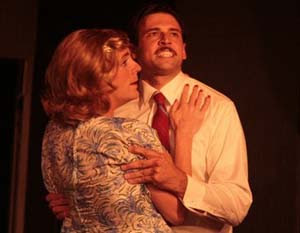