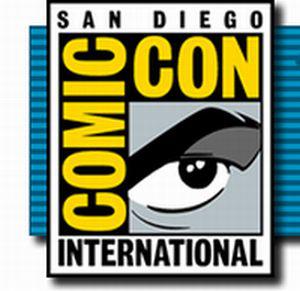 Well who'da thunk? I finally made it to the CON. After months of trying (involving waking up early to jump online and not making it past the waiting room) I got a resold ticket. For Sunday only. Since I'd never been before, being the researcher I am, I looked up every blog I could find on the phenomenon and took the advice very seriously. Usually when I travel it springs from spontaneity and I kind of decide where to go once I'm there, but with the magnitude of the CON, I knew I had to choose a different tactic.

First of all, just getting a ticket is a big pain. Not just that waking up early part, it's also the actual waiting part after that, to see if you made it in. Then choosing a hotel, with a similar kind of website deal, just not as painful. As I feared, I ended up on Hotel Circle. Actually that turned out to be not so bad as the shuttle took us straight to the convention and the hotel was probably quieter than the ones downtown. I'm assuming.

Second, everyone talks about how huge the convention center is. No kidding. I think I read something about walking roughly three miles in order to see everything. I believe it. It's gi-normous. There is no way to take it all in in one day. And unfortunately, that's all I had.

So, three, everyone also talks about the lines, lines, lines. No kidding part two. There's a line to pick up your badge, a line to get in, a line to get a t-shirt. And these are not grocery store lines. More like overnight sold-out concert ticket lines (and yes, people do camp out, for days even, for some of the events taking place there).

Here's where I stood in line: 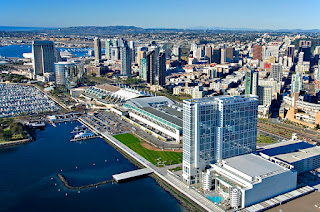 See? Big. I didn't mind all THAT much though because it was my very first CON so I was eager to take in every (EVERY) experience. The hotel site makes you book two nights so I had Saturday to wander San Diego itself, which I didn't know too well. I remember Old Town being kind of cool but wanted to stay more in the downtown area so I checked out the Gaslamp district. Dined at a quiet Italian place and just people watched. The crazy, crazy people. Like the Edinburgh Fringe Festival, the streets teem with people in costume, handing out fliers, chasing celebrities and wreaking good natured havoc. I am sure the locals have learned to live with this July madness, just like the Scots have to every August. I loved it, though I can imagine getting a little claustrophobic after a few days. But since I just had the limited time, I drunk it all in. By the way, another tip I followed is to drink a lot of water. It's summer, it's hot, it's crowded, you get tired and lose track of time. I was told not to eat the convention food and to bring my own, but it didn't seem too bad in there.

Which brings me to the big day. Right. You should get up early, get a head start on those lines, lines, lines. So I thought I was early, but even an hour early still brought me to a long line. Oh well. When that was finally over, I got my badge and a ridiculously huge Warner Brothers bag (who came up with this size?) that wouldn't fit in my satchel so that was another awkward hour standing in line until I could wrangle another bag. From the t-shirt line (did I mention the lines?)

But then I was in. And took a moment just to register it all. Yeah, big. Comics, comics, more comics (yes, they still sell comics - they haven't sold out that much), studios forcing swag on you, people, people, people, and the costumes. Nerd and geek cosplay (in costume) from STAR TREK, STAR WARS, DOCTOR WHO, every kind of superhero and comic fantasy imaginable and then some. Once again, I followed sage advice and took a break once in a while to get out of the convention center, breathe some harbor air, people watch outside and then brave the hordes once more.

I didn't do any panels. I only had one day, remember? And the panels have - you guessed, lines, lines, lines. Especially the big studio ones. The Twihards slept outside for two (TWO) days to get in to see their TWILIGHT idols (ugh). I would have liked to see a few (like my SUPERNATURAL boys) but decided to forego those lines and focus on the event itself. The inner core. And vowed to take stock of what I learned for when I came back again next year. Hell yes, I'm coming back.

So I didn't get an autograph but did glimpse my boys: 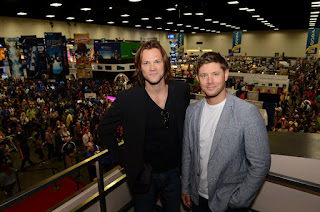 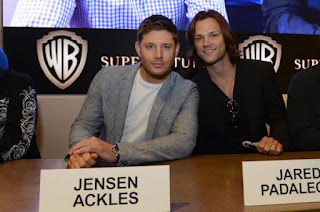 But no sign of my fave!  I love Spider-man. He's been my favorite superhero since I was a kid watching those afternoon cartoons with that catchy song (you know the one). He's a teenager and a climber(!) and ends up working for a paper. What's not to love? I guess that makes me a Stan Lee fan and obligated to see his movies and spot his cameos (and hey, comic aficionados, I know more people were involved in those early comics than just Stan Lee, but I'm still learning. I also love Neil Gaiman and his SANDMAN series so that should buy me a little redemption). But back to my adventure. As foretold, I ran into many people I recognized (not so many people I knew, unfortunately - I never seemed to be able to coordinate with peeps I knew were going, go fig) like ... 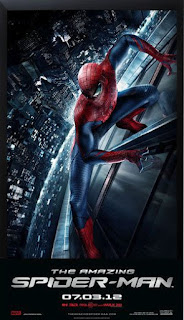 The Enigma, from that circus episode on The X-Files (Humbug), did you see that one? That was a fun one. I am sure he gets tired of being asked the same questions (did those tattoos hurt?) but as he was hawking his very own comic book, I am sure he took it all in stride. 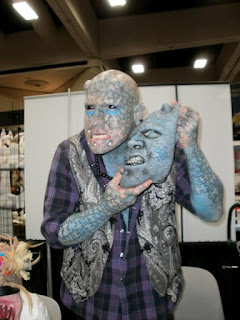 Also saw a quirky little group of nerd music makers called Kirby Krackle. They do hilarious lyrics to rock music, paying homage to geek pursuits, like gaming and movie role playing, etc. By Sunday, there probably weren't as many familiar faces as the earlier days, but you can still spot some good ones. 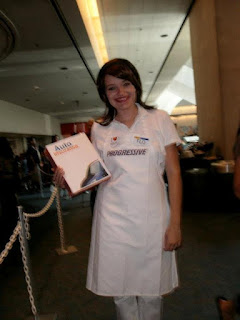 My feet hurt less than they should (thank you marathon shoes) but I did get awfully tired. I refreshed with  power bars, coffee and water to make it through the day before collapsing back in my hotel room with room service.

Bottom line: I have to go back. It was surprisingly hard to say goodbye to San Diego as I pulled out of the hotel parking lot. A hop, skip and a jump from Los Angeles, it's really not a big deal for me to jet down there every once in a while. The atmosphere is electric and as San Diego is already a tourist attraction, you get the sun, the water, the summer vibe, along with sci-fi and fantasy. It's Nerd Mecca. I know that die hards lament the studios taking over their comic book floors, but the revenue must be awfully nice for San Diego and even the most petulant graphic novel enthusiast can't help but jump for joy at spotting a comic hero. In addition to move stars and even more television starts, Comic-Con offers comic book illustrators and creators, muses and icons of the comic world. Almost anyone you can think of from that world has passed through the hallowed halls, to the rapture of their followers. Ray Bradbury used to show up there all the time. It's just that now it's maybe (a tad?) more crowded. But oh so very, very worth it.

Oh and my revelation? While I'm not a fan girl, I am kind of a nerd. But you knew that already. Anyway, if YOU want to go, click here. 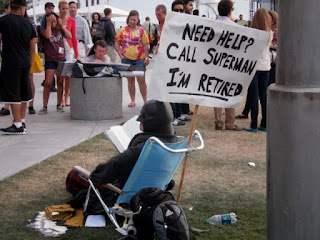