The innovative British production of "War Horse" finally makes it way from Broadway to the Los Angeles stage. Originally a book by Michael Morpurgo, the story was adapted for theater by Nick Stafford and brought to life by The Handspring Puppet Company. This South African troupe uses puppetry to illustrate storytelling, a more and more popular approach to modern theater (we all remember Julie Taymor's fabulous version of "The Lion King", right?)

The essential story is of a beautiful horse, Joey, born to be a hunter, but raised as a farm horse by the young Albert Narracott (Andrew Veenstra). Both are soon drafted to the army unfortunately, for the first World War (the war to end all wars), and lose each other in the ensuing chaotic madness of battle. Both endure terrible hardships and are forced to grow up faster than they wanted to, before finding each other again.

The play seems to tell us, that yes, war is hell. Especially when a hunter learns to be a draft horse, then a war horse, then a draft horse again. The core innocence of the horse with many masters (Michael Stewart Allen as Captain Friedrich Muller is a particularly strong and poignant owner) mirrors the boy's fragile hope in finding his beloved companion once more. There is no mercy during wartime and the only thing that can keep you going is to hold on fiercely to whatever you believe in. Men, women, children and animals die during war - there is no discrimination with death. And as far as the plot goes, that is pretty much it. But a powerful message, to be sure.

Steven Spielberg jumped at the chance to show these images on the big screen and made his award-nominated film "War Horse" while the theatrical productions were still going strong. It is hard to imagine missing out on the creativity of the staging, however. Each horse is masterfully manipulated by three actors. They make the sounds and movements so very realistic, while maintaining a lovely stylized version of that truth. This must have taken a great amount of rehearsal (in fact, the Ahmanson postponed its opening in order to perfect the carefully synchronized choreography). Each animal is crafted with mechanical precision (a bit more complicated than the horses of "Equus") and delights audiences by drawing them into the personalities of the animals. We forget there are humans behind the masks.

As a sorrowful background chorus, John Milosich sweetly sings ballads during much of the action, giving us a local flavor of Devon, England, in a time gone by. Above the village is a large torn sheet of paper where shadows, drawings and pictures flash across its screen during key moments in the play. There are explosions and (warning) gunshots too, spooking both horse and audience. A simple and poetic story, rather reminiscent of Anna Sewell's "Black Beauty", Joey the War Horse shows us the dimensions of mankind, in moments of kindness and cruelty. It's a nice story, elevated by the incredible stagecraft spectacle of the puppets. (Oh, there's a tank too).

Worth seeing for the imagery, so don't spoil it by seeing the move first. And you might want to skip the film altogether after this. But that's up to you since ... a horse is a horse of course. 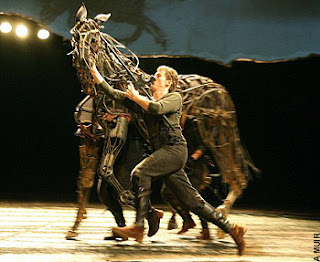 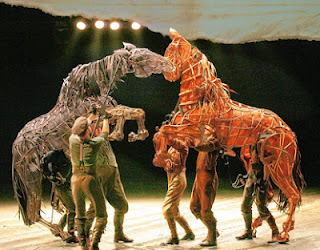 To see the movie:
War Horse