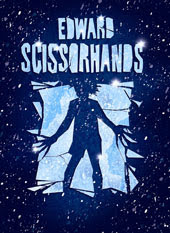 
Brooding Goth man-child Tim Burton (with writer Caroline Thompson) created the cult film Edward Scissorhands, forever memorable for its childlike magical wonder. The decision to transition from screen to stage could only work with someone as in tune with childhood beauty and fantasy. Matthew Bourne, cult leader in his own right (from such innovative takes on “Swan Lake” and “The Nutcracker”), is the perfect choice. Both artists identify with the societal problems of being brilliant but different and their creative ingenuity match nicely.For those unfamiliar with the story, Edward Scissorhands (Richard Winsor) is a boy with scissors for hands, created by an inventor as a companion in his old age. When his mentor dies, he is forced to fend for himself and discovers a retro-1950’s suburban heaven outside his dark castle.

Initially fearful of each other, Edward and the neighbors learn to co-exist, in no small part due to the acceptance of one of the prominent families, the Boggs. As an added bonus, Edward falls for their teenage daughter Kim (Kerry Biggin), and eventually wins her over. Meanwhile, Edward becomes the popular local hair stylist, at last finding one use for his talented scissorhands. His fearful nightmare appearance hides a fragile and vulnerable heart and it is this juxtaposition that makes the story so interesting. Kim’s boyfriend Jim (Adam Gabraith) is one of the people who misunderstands him, ultimately causing a series of disastrous events.

As usual, director/choregrapher Bourne uses no dialogue, relying instead on the emotion of the music and the passion of the dancers. The ensemble is strong, especially the two leads, Richard Winsor and Kerry Biggin, and their supporting cast delves delightfully into Bourne’s amazing choreography. Lez Brotherston’s set and costumes are a visual feast, with vibrant colors and fantastical shapes of hedges and landscaped manicured houses. Bourne’s trademark humor shows in many ways; for instance, in one scene the dancers walk in and out of tiny set houses. Terry Davies (“A Play Without Words”) maintains the musical integrity of Danny Elfman’s film score, while adding his own appropriate jazzy style. Also, Howard Harrison’s lighting sets the mood evenly between dark and light and in the end we even get snow.

Tim Burton’s essential cinematic story remains the same, from the old woman “narrator” to the man-eating husband stealer. Not only is it a modern fairy tale, but also a microcosm of social stereotypes. Edward, with his awkward appendages, is the least able to physically touch anyone but the most able to reach people with his heart. The rest of the townspeople don’t seem to learn this in the end with the exception of a few - so like life. Edward retires to his empty castle, leaving the others to wonder about him from time to time. Kim, of course, is profoundly changed, and becomes his guardian angel in the end.

The film and the play may be of different styles, but are alike in their touching tale of humanity. And both hold the essential appeal of a storybook romance. Plus Bourne's "Edward Scissorhands" is a great holiday event and appeals to all audiences, drawing a younger, newer crowd to Los Angeles theater, which is never a bad thing.