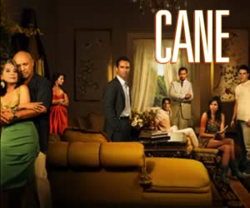 
Cane deserves notice as one of the first Latino family dynasty shows. Alex Vega (Jimmy Smits) and Frank Duque (Nestor Carbonell) are brothers by marriage under Nacho Duque's (Héctor Elizondo) reign. The incomparable Rita Moreno is his wife Amalia, forever playing peacemaker amongst the many passionate offspring (eight of them, with the extended family spouses).

The Duques are a Cuban family making rum in Florida for generations now. The latest big controversy is that they will now operate by machine only, eliminating the need for workers in the field. Of course there are scandals and pay offs in the periphery and the local law is keeping a wary eye on the goings on. All making for sexy intrigue and keeping us tuned in. It's not the Sopranos, but it is interesting enough so far.

As a Latina myself, I applaud this trend, portraying different facets of Latino life, giving Hispanic actors fulfilling, well-rounded characters to play. Edward James Olmos campaigned for so long to be the poster boy for Latinos in film, it's nice to have a plethora of talent to choose from now. Not that they' re weren't always around, they just weren't always cast. Ah, Hollywood. Thank you for stepping up, just a little bit more.