Sex and the City - the Movie 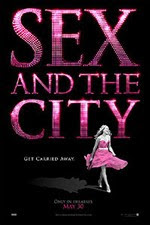 Sex and the City
a kate west review

The much-anticipated film "Sex and the City" delivers luscious fashion images to its multitude of eager fans. Designer dresses and shoes galore abound as does, of course, the gorgeous background of a hip Manhattan, New York. All served up in a yummy visual feast that you won't be able to take your eyes off of.

Carrie, Miranda, Charlotte and Samantha are back, a little older, but maybe not so much wiser. As in the show, they keep making the same mistakes, falling back on friendship for support and these life experiences force them to grow up just the tiniest bit. This is the main complaint of naysayers, that that film is merely an expanded episode, but any transition from television to film will inevitably go that route, since the two mediums are so different. However, rabid fans will be satiated by the gorgeous accessories and the familiar patterns of characters. Just keep in mind that there is only so much you can fit into a feature length film, versus six years of a series run. If you allow yourself to enjoy the ride, you'll find that the movie ties in nicely with the series and that even though the series finale seemed to give us a final note, there is always more urban angst to squeeze out of truly neurotic New Yorkers. And isn't that part of the fun?

It's not Shakespeare people, so let yourself go - drink that cosmopolitan, rent that Prada handbag and bring your best gal pals. And toast fabulous women in their 40's and 50's who are still viable, beautiful and more than relevant, with or without men (plus, nice addition of sweet Jennifer Hudson, guys!)


Past review of the show here:
http://www.katewestreviews.com/2004/12/sex-and-city.html