It's only been a couple of decades in the making, but The Simpsons Movie is finally here! My brother and I have pretty much every episode memorized, between the two of us, so this is big deal for me. So much of my daily vocabulary is thanks to them. Mmmmm! D'oh! Woo-hoo! Mmh-mmh-mmh? (how does one spell that, anyway?) Excellent! Hah-hah! And HA! I'm a fan, in the very fanatic sense of the word. I even went to a Kwik-E-Mart early one Saturday morning to try a squishee. And the next day I had a pink doughnut. Mmmmm. Sometimes I'm mercilessly drawn to pop culture consumerism. I designed a Simpsons character for Kate West. See? 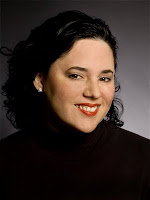 Anyway, I had great fun at the movie. It's one big long episode, really, but that's the fun of The Simpsons. We love them and want to see them in their element, with Homer doing something colossally stupid, this time on pretty much a national scale. He ruins the environment in Springfield, causing the evil government, run by Arnold Schwarzenegger (NOT Rainier Wolfcastle), to put a dome over the town. His family escapes through a sinkhole before the town can lynch him and they end up in Alaska, of all places. The main voice actors are featured, and I'm sure many people will complain about not seeing enough of their favorites, but the movie runs under two hours, so they can't fit everyone in. It's nice to see Bart appreciating Flanders, for once, and to see Marge being open and emotional with Homer. (You know all will be forgiven in the end, right?) The regular scenes are morphed into bigger emotional arcs, fit for the big screen. Fun sight gags and satirical references (you'll love "Spider-Pig" - so gloriously dumb), and of course you have to stay for the end credits. Well, I didn't, but that's not your problem.

Voice Actors in the Movie:
Julie Kavner as Marge

Albert Brooks as Russ Cargill (voice) (as A. Brooks)

Worth seeing for Simpsons fans. And if you are one of the remaining holdouts and have never seens a Simpsons episode, you may as well start with this:

The Simpsons - The Complete First Season