Sunflowers, Cacti and Camping, from Van Gogh to Joshua Tree 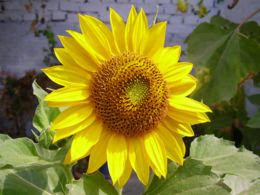 I can't explain it but I'm fascinated by sunflowers. I think because they really are sunny and open and obvious. So maybe I can explain it. And I don't remember where it may have started but I have a great picture of me in front of a huge field of sunflowers somewhere in Austria, which I suppose I'll have to scan onto here at some point. My aunt is a really good amateur painter so I gave her the photo to recreate but she ended up painting me out of it. Boo. Nice looking sunflowers though. They just make me happy when I look at them, more than any other kind of flower. 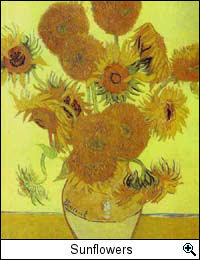 Van Gogh loved sunflowers. His "Sunflowers" (left) are an abstract version of the real thing and really bring out that yellow intensity. But then again, everything about him was strong and intense, so they're the perfect flower study for him. It's a little cliché to be into Van Gogh, but there's no denying he was a colorful tradition-defying artist and did everything bigger than life, making it all that much more real. To simplify a point. 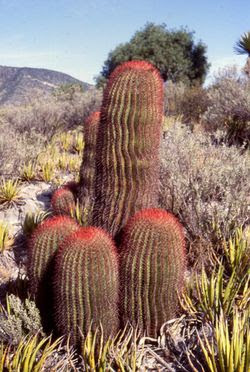 And apparently I'm also into cactus. Or cacti. I never liked the desert before, but have developed quite an affinity for it the past couple of years. And I definitely do know where that started - my three day camping trip in Joshua Tree (see below). I have one cactus (which I named Harris) I received as a housewarming plant years ago and it's one of the only plants I haven't killed off, so I've greatly admired his hardiness.

Then I started thinking about the design of cacti and how they're able to survive in such harsh conditions and my appreciation grew. I have a second cactus now, a smaller one, called Walter and have dreams of cultivating my own beautiful cactus garden someday. Maybe when I have my own house with a huge backyard, big dog and maybe even a hammock. Sigh.

So my trip to Joshua Tree a few years ago. It was a three day trek and climb, meaning camping out for two nights, hiking and rock climbing under the October stars. It was an incredible experience being out in the desert for three days. The cool thing about that environment is the silence. It's not just quiet, everything seems like it's under a big dome, a thudding kind of quiet. You feel really alive and realize that the desert itself is full of life, in spite of it's outer wear seeming the opposite. It is a truly beautiful place and I finally get why people go to commune there or have vision quests, though hell will freeze over before you catch me at the Burning Man Festival.