The Assassination of Jesse James 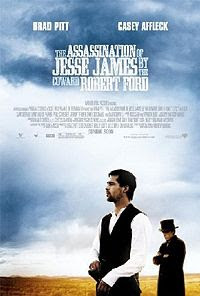 
The latest version of the Jesse James story is told in the remarkable film by Andrew Dominik, "The Assassination of Jesse James by the Coward Robert Ford". Narrated by Hugh Ross, with spots of sepia tones and vintage 1880's lenses, the film depicts the legendary outlaw in his final years.

Brad Pitt is the lead, portraying James as the calculatingly cold killer that he was, but with a haunting awareness of his own weaknesses. Casey Affleck (yes, Ben's little brother) gives an outstanding performance as Robert Ford, the man responsible for ending Jesse's life. Focusing less on the James/Younger brothers famous gang exploits, the film explores the aftermath, when the paranoia and disillusionment set in. It is a less glamorous look at the real inner world of the coarse and hardened men of the old west. Jesse James killed a lot of men in his time, and while he justified it to himself in his lifetime, it was never a noble affair, but often rather a petty reaction to life's inevitable obstacles.

Brad Pitt portrays James as the still wiley and alert man of infamy, with the dread of the modern mob boss. The scenes in which characters await his arrival are the most filled with fear and trepidation. As each suspected betrayer is gunned down, weeping and begging for mercy, the two Ford brothers become more and more nervous that James will discover their involvement with the authorities. One scene in particular shows Pitt slowly stirring his coffee, reading the newspaper, which everyone knows full well to be incriminating. The camera shows his hand stop stirring, then running his finger down the lines of print, leaving us in an agony of suspense.

The entire movie is told in bits of suspended anticipation and in character contemplation. In spite of it's length (two hours and 40 minutes), the movie keeps an appropriate pace, revealing each rich suspenseful moment, beat by beat. Pitt is wonderful as the icy cold James, someone you don't want visiting you in the middle of the night, someone with eyes in the back of his head. And Affleck outdoes himself as the nervous hero worshipper, forced to betray his idol, never making eye contact and justifying his cowardice for the rest of his short life. Sam Rockwell is also good as his brother Charley Ford and Sam Shepard makes a commanding appearance as Frank James. Every actor turns in a profound performance, from Paul Schneider and Jeremy Renner (the two initial Judas Iscariots) to Mary Louise Parker (as Jesse's wife Zee) and Zooey Deschanel (Ford's lover).

By the time we reach the final scene, where Jesse goes to hang a picture and Ford shoots him in the back, we've come to know these characters, for better or for worse. Although most of us know the history and expect the outcome, we still feel a pang for a fallen legend, deeply flawed though he might be. Perhaps, as is hinted in the movie, Jesse was ready for his execution, having wearied of his own inner conflict. And it is an unexpected bonus to be able to get to know Ford, so often painted as a cowardly villain, who may have been just as human as the rest of us.

The movie is ultimately about death, both that of James and Ford, one somber, yet exploited, the other virtually forgotten almost the moment it happens. It is also about vilifying and idolizing the wrong kind of hero. It is also much more than your standard western and a movie you will have a hard time letting go of.

The Book:
The Assassination of Jesse James by the Coward Robert Ford