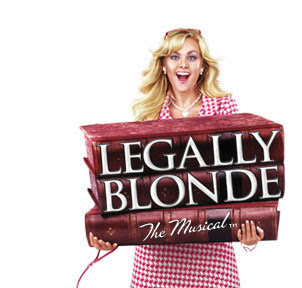 How often do you get a sneak peek at a currently running Broadway show? MTV offered viewers that very chance this weekend by broadcasting the full length "Legally Blonde The Musical" straight from the New York stage. It's a pretty cute show for free, considering top running Broadway shows can run you about a hundred bucks easy.

The show follows the Reese Witherspoon movie hit fairly closely, with Laura Bell Bundy in the lead as Elle Woods, the Malibu barbie doll who gets accepted into Harvard Law School, surprising everyone, even herself. She's there chasing her ex-finance Warner Huntington III (Richard H. Blake) who dumped her for being blonde ("Serious"). With the support of her faithful sorority sisters ("Omigod You Guys", "What You Want"), she decides to get serious and apply herself, completely trading coasts and attitudes. Challenges abound, including impressing the tough Professor Callahan (Michael Rupert) by managing to get into his exclusive intern program. The ultimate discovery is a profound belief in herself, of course, resulting in forgetting about her snobby ivy league ex, taking up with a new lawyer hottie, Emmett Forrest (Christian Borle) and finally earning the respect of her peers, even becoming class valedictorian. She even defies her Professor when he proves to be fallible. An inspiration to little blondes everywhere.

Bundy and Borle make a cute couple and have some nice numbers together ("Chip On My Shoulder", "Take It Like A Man" and "Legally Blonde"). Fun standouts include Elle's spacey hairdresser (Orfeh) who makes the part her own, in spite of the popularity of Jennifer Coolidge's crazy fun movie character. With Elle's help, she lands her sexy UPS man, Kyle (real life husband Andy Karl) and recovers her beloved bulldog Rufus from her evil ex boyfriend. Elle is highly sympathetic as she has her own beloved Bruiser, a stylish chihuahua, and dog loving romantics have to stick together. Completing the feminine circle of strength is the spunky Greek chorus, comprised of the Delta Nu sisters (the energetic trio of Annaleigh Ashford, Asmeret Ghebromichael and Tracy Jai Edwards) who appear occasionally to give Elle some helpful advice. Elle also meets a tired stereotypical Birkenstock lesbian Enid (the solid Natalie Joy Johnson) at Harvard.

Devoted fans of the movie will also notice certain deviations, such as some brilliant ideas coming from the man, Emmett, rather than Elle herself, or a bizarre courtroom scene where the Judge (Amber Efé ) orders everyone to the bathroom crime scene in order to rat out a suspicious hair perm, following the outing of the gay pool boy Nikos played by Manual Herrera ("There! Right There!"). Elle prevails in the end, and exonerates her fitness idol Brooke Wyndham (Nikki Snelson), on trial for allegedly killing her millionaire husband. Thank God for Greek sisterhood. The first act is stronger than the second act, which seems to get a little off track, especially in those odd moments.

The overall show is harmless frothy fluff, cute if you like that sort of thing. Fun eye candy for free, but a bit of a steep price, unless your teenage daughter won't speak to you otherwise. Judging from the MTV audience, it's a hit with the young crowd, so you might want to brush up on your teen speak, or just send the babysitter. Or you can stay home and rent the movie again with some microwave popcorn. Oh, and special kudos to animal wrangler William Berloni - those dogs are adorable.